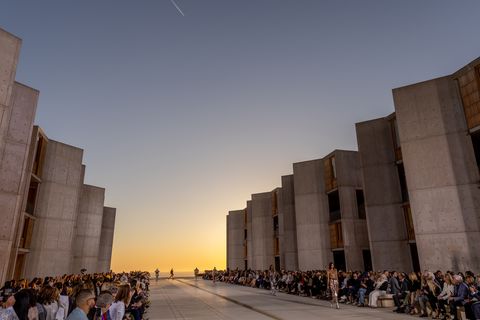 On the catwalks, a tangible expression of Nicolas Ghesquière’s artistic genius and in full compliance with Louis Vuitton codes. All around, on the other hand, a scenario of a concordant grandeur, but visually so dry that it leaves you speechless. Louis Khan’s architectural brutalism sets the stage for the Louis Vuitton Cruise 2023 show, held in California on May 12. A place that the artistic director of the house, Nicolas Ghesquière, says he chose because it was for him a source of “infinite inspiration”. An inspiration which, in front of the collection itself, materializes in Louis Vuitton Cruise 2023 Clothing.

The location? “It’s a celebration of intelligence and knowledge”

The Pacific Ocean as a backdrop, a Californian sunset and the enveloping atmosphere of the Salk Institute for Biological Studies in San Diego: “Having spent a lot of time in California – the creator tells www.wwd.com when the house unveiled the location – I was attracted by the idea of ​​presenting my collection there. For years, the Salk Institute has been a place where I get lost. The extraordinary architectural brutalism of Louis Khan contextualized against the backdrop of the Pacific Ocean and the Californian sunset is for me an endless source of inspiration. It is a celebration of intelligence and knowledge, but also of faith in the wonders of science”.

A celebration that takes a moment to transform, before our eyes, into a dialogue between architecture and fashion. The roughness of the exposed concrete all around – the so-called gross cement (characteristic element of Brutalism, an architectural current born in the 50s of the English 20th century) – it seems to have been borrowed from the creative director, who makes textures for his clothes from it. Icy shades of gray predominate in Louis Vuitton Cruise 2023 fashion wear, elevated and at the same time made precious by metallic finishes and material elements that give body and volume to each creation presented on the catwalk. Until valuing its futuristic approach.

Powerfully material it is also the look that opens the Louis Vuitton Cruise 2023 show: the honor goes to Lous and the Yakuza, born Marie-Pierra, African singer born in Congo in 1996. Beautiful, good, but above all endowed with an extraordinary personality and history: in an architectural and “brutal” stronghold like the Salk Institute, her dress black gold Louis Vuitton seems to impose itself as a protective armour. Armor she might have wanted as a child, when at age 5 she was forced to move to Belgium to find her mother in political exile. An armor she might have desired even as a teenager when, returning to Rwanda to live with her family, she understood that she would soon leave her homeland to escape the atrocities of the genocide and realize her dream in Europe. : making music, despite parental opposition. Strong, current and contemporary themes, which Nicholas Ghesquière transforms into a metaphor for female emancipation and redemption on the catwalk of the Louis Vuitton Cruise 2023 show.

Lous and the Yakuza for Louis Vuitton Cruise fashion 2023

While past and present stand in stark contrast in the story of Lous and the Yakuza, so the material elements act magnetically in the Louis Vuitton collection. The draperies of the dresses culminate in headpieces in rough fabrics, differentiating in the look by the marked contrast with shiny, shiny and mirrored sequined mini-dresses.

As well the leather trend is stylistically revived in Louis Vuitton Cruise 2023 fashion wear to give the impression of creating/wearing armor: contrasting the roughness of the fabrics, the leather – shiny enough to invite to perceive its softness to the touch – is the protagonist in the skirts worked in a patchwork touch, in the boots with details cut out, sometimes also experimenting with the contrast of symmetries with crop tops that seem to want to remind him linothorax worn by the soldiers of ancient Greece (and again, the sense of paraphernalia back).

Contrasts of materials, but also chromatic. In palette Louis Vuitton Cruise 2023 clothing is also distinguished by warm, bright and lively colors. Red pants triumph under beige dresses reminiscent of the Middle East, looks constructed with skirts and crop tops but also with oversized pants and sweatshirts (re)see the clear contrast of yellow with orange and blue : here it is, it is the most tangible (chromatic) expression of the inspiration that the Salk Institute has offered Nicolas Ghesquière for years.. Red, orange, yellow, blue: these are exactly the colors that stand out against the backdrop of the Pacific Ocean and the Californian sunset. Those which, for the artistic director Louis Vuitton, represent “an infinite source of inspiration”.

Celebrating the colors of the sunset is intentional: the same architect Louis Khan placed the sun at the center of the Salk Institute, making it the protagonist of a highlight of the day. Perfectly framed by the imposing architectural structure, the sun now becomes what Louis Vuitton defines as the “guest of honor” of the Cruise 2023 collection. above all) spectator of what is happening on the catwalk: a celebration of the powerful harmony of opposites (which attract).

THE MOST READ ARTICLES OF ELLE.IT

The short haircuts of the fashion shows

This content is created and maintained by a third party, and uploaded to this page to help users provide their email addresses. You may be able to find more information about this and similar content on piano.io