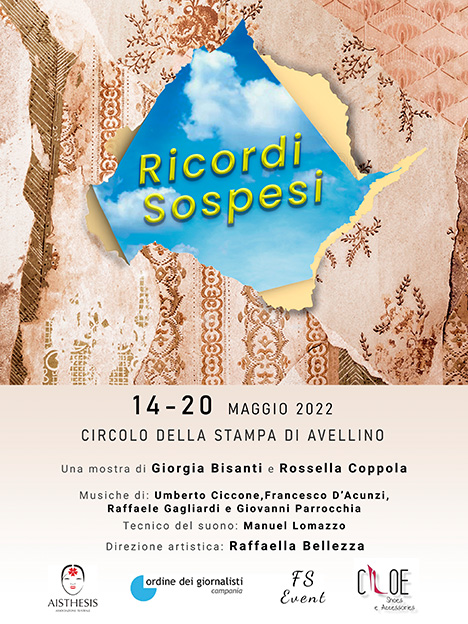 The multidisciplinary exhibition “Suspended Memories” begins, an emotional and experiential journey through the contamination of different expressive territories, such as photography, fashion and music, united by a common thread, that of time and memory. Tomorrow, Saturday May 14, at 6.30 p.m., at the Circolo della Stampa in Avellino, in Corso Vittorio Emanuele n.6, the opening of the event will take place. The ‘Suspended Memories’ exhibition will be open until May 20, from 10:00 a.m. to 1:00 p.m. and from 5:00 p.m. to 8:00 p.m.

The young and talented authors of the “Suspended Memories” exhibition are the photographer and visual artist Giorgia Bisanti, the stylist Rossella Coppola, the composers Umberto Ciccone, Francesco D’Acunzi, Raffaele Gagliardi, Giovanni Parrocchia and the sound engineer Manuel Lomazzo, with the artistic direction of Raffaella Bellezza. It organizes the Theatrical Association “AISTHESIS”, chaired by Luca Gatta, and FS EVENT srls, in collaboration with the Order of Journalists of Campania and Cloe de Serena Fierro. Below are the biographical profiles of the protagonists of ‘Suspended Memories’

Night of Museums in Irpinia, 12 events with the Cimarosa Conservatory

Eliana Petrizzi, “Lost to be found”: exhibition at AXRT in Avellino

Coronavirus positive in Irpinia 432. In Campania: 4,733 cases and 9 deaths