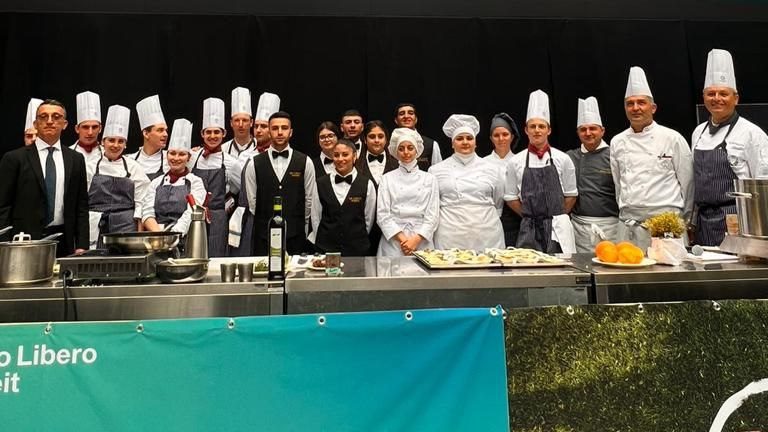 For the 44 for edition of “Tempo Libero”, typical Calabrian products mixed with those of South Tyrol in a mix of flavors and goodness.

Good cuisine and typical products: the flavors of Trentino mingle with those of Calabria in an unparalleled blend of goodness in a high-level public culinary demonstration, commissioned by the Chambers of Commerce of Bolzano and Cosenza. This happened during the “Tempo Libero” Fair in Bolzano, four days of an event that held its 44th edition dedicating exhibition spaces and thematic meetings to Sport, the world of Food and Youth. More than 36,000 visitors took turns in the spaces located in the center of the Alpine Arc, in a bilingual region, which serves as a meeting point between companies from the German-speaking and Italian-speaking regions. The Show Cooking, wanted by the two respective Chambers of Commerce, saw the two hotel schools of the two regions as protagonists: the Landeshotelfachschule Kaiserhof (Provincial Hotel School) from Bolzano and the Institute IPSSEOA of Cariati (CS). South Tyrolean and Calabrian students joined the kitchen, cooking dishes with typical products from their respective lands, mixing them in a final high-level tasting.

After a moment of presentation of the two schools, the first course carried out with Sibari rice with cream Pecorino Crotonese Dop, to which were added Zambana asparagus, the white asparagus that benefits from the De.Co. coming from Terre d’Adige. All in emulsion with Belmonte Calabro Tomatoes with the scent of cedar; in the second course, the loin of Cervo della Valle Aurina is combined with the typical Mediterranean flavor of Calabrian licorice. The third and last course included a dessert based on a pastry cream Citrus from Calabria.

The President of the Chamber of Commerce of Cosenza, Klaus Algerisaid he was satisfied with the synergistic collaboration between the two chambers, saying he was ready to strengthen relations with further initiatives: “In February 2020, a delegation from South Tyrol was welcomed in Calabria and it is an opportunity to make the visit reciprocal and lay the groundwork for organizing other moments together”, commented President Algieri.

For the IPSSEOA of Cariati (CS), whose group of students was followed by prof. Roberto Pastore and by Prof. Antonio Mignanelli in the preparation of the dishes, it was an extraordinary experience that consolidated the skills of the children and gave them – after the long period of school isolation due to the pandemic – an opportunity to meet and learn in the field of all respect.

From cedar to tomato, from licorice to Sibari rice, the flavors of Calabria stood out for their intensity: the same happened to the Pecorino Crotonese, a pure milk cheese, for the high quality of the sheep pasture. The hills of the Ionian hinterland are rich in native herbaceous species that give certain organoleptic properties to the milk produced by the sheep. The supply chain of Pecorino Crotonese DOP includes 50 livestock companies, 3 production companies that process approximately 30,000 quintals of milk each year from the Marquisate, which includes the provinces of Crotone, but also some municipalities of Catanzaro and Cosenza, including Paludi, where the Fonsi company resides, the only Cosentino company to produce it.