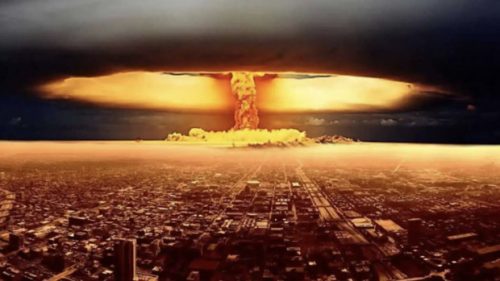 After a nuclear disaster, food would be scarce in the world for almost two decades. A team of scientists explain what we should do to survive in these circumstances

The war in Ukraine has once again raised the dire prospect of a nuclear conflict. And if that happened, and the major world powers were involved, the casualties would be countless. But even the survivors would not have it easy. The reason? Among the many devastating effects of the massive use of atomic bombs, one of the worst would be the so-called ‘nuclear winter‘, a concept coined by Carl Sagan in the midst of the Cold War and which consists of raising dense clouds of dust and ash, caused by bombs and which will prevent the sun’s rays from reaching the surface of the planet for a long time. The darkening of the Sun would have lasted for many years, long enough for the world to be plunged into a severe cold, most of the crops would be ruined and the surviving humanity would be struck by terrible famines. But war is not the only possible cause of a nuclear winter. The history of the planet teaches us that in the past natural events such as the impact of meteorites or massive volcanic eruptions would have had the same catastrophic consequences. A similar event, for example, sounded the death knell for the dinosaurs after a rock 10 kilometers in diameter hit Earth 66 million years ago. Animals that did not die on impact did so shortly thereafter from starvation. And with them the 75% of the rest of the species that inhabited the planet at the moment. How would humanity survive in such circumstances? What would the survivors of such disasters eat? A study led by Daniel Jefferson Winstead and Michael Gregory Jacobson, experts in ecosystems and forest resource management at Penn State University, has studied the issue in depth and proposes a series of measures to ensure that the food supply does not s stop abruptly. circumstances arise. The work was recently published in the journal Ambio of the Royal Swedish Academy of Sciences. “A global catastrophe capable of obscuring the sun – write the authors – it’s more plausible than some would like to think“.

The models showed devastating effects that these events could have on global agricultural systems for at least 15 years. In this situation, it would be necessary to find new crops resistant to shade, drought and cold and more sources of food reserves to hope to feed the world population in such scenarios. According to the researchers, in the event of a nuclear war, we would no longer see sunlight for at least 15 years, as soot injections into the upper atmosphere would blanket most of the planet in dense black clouds. Computer models predict that a major nuclear war, primarily between Russia and the United States, which possesses most of the world’s arsenal, could inject over 165 million tons of material into the atmosphere from 4 000 explosions. Material produced both by the same explosions and by subsequent forest fires. According to the study, under these circumstances, the incidence of solar rays would be reduced by 60% in equatorial zones and up to 95% near the poles, with temperatures below zero in most temperate regions and large reductions in global precipitation. In some tropical rainforests, such as those in the Congo Basin and the Amazon, rainfall would be reduced for many years by up to 90%. With crops in ruins and pastures frozen, the large herds of herbivores they would quickly disappear, and with them the meat in our diet too. However, despite the disaster, the rainforests would still provide a limited food production opportunity for the local population because, despite the thick soot clouds, the region would be somewhat warmer than the rest of the planet. And deep in the forest, experts suggest, several plants have the potential to function as fallback food until conventional agriculture returns in the event of a nuclear disaster. In their study, the researchers classified edible wild plants into seven broad categories, in addition to forest insects: fruits, leafy greens, seeds/nuts, roots, spices, sweets and proteins. In particular, research shows that certain amounts of these foods may be available in these regions: konjac, cassava, wild oyster mushroom, safou, wild spinach, vegetable amaranth, palm, mopane worm, dilo, tamarind, baobab, enset, acacia, la potato and the red palm weevil, a pest that mainly affects palm trees and is thought to be an acceptable source of protein. From an initial list of 247 wild food plants, the researchers selected 33 as the most suitable for growing in rainforests after a nuclear war. In other regions of the world, already uninhabitable for humans, agriculture would not be possible. According to Jacobson, her work opens a new perspective on global food security and resilience using forest foods, resources that are clearly underutilized today.